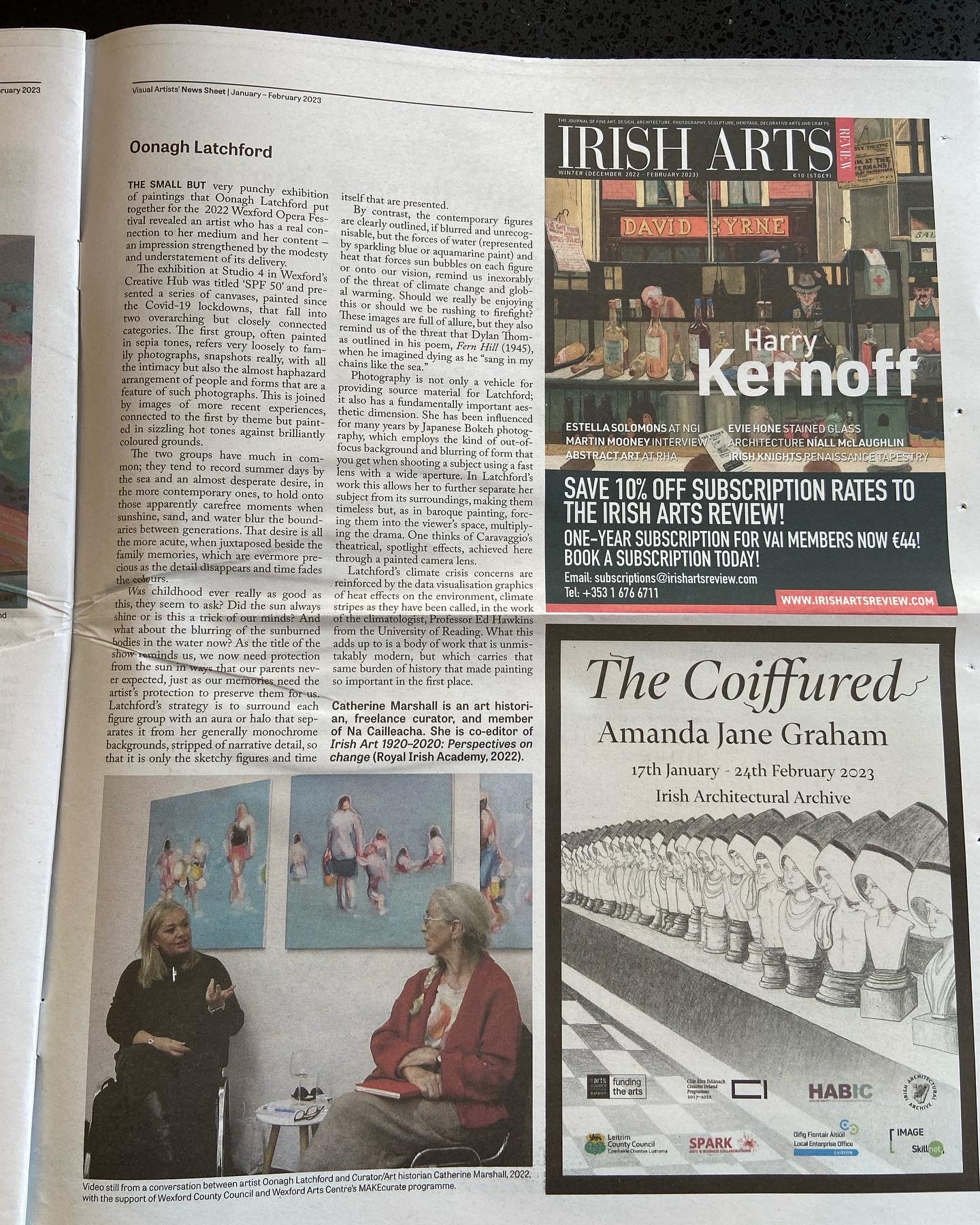 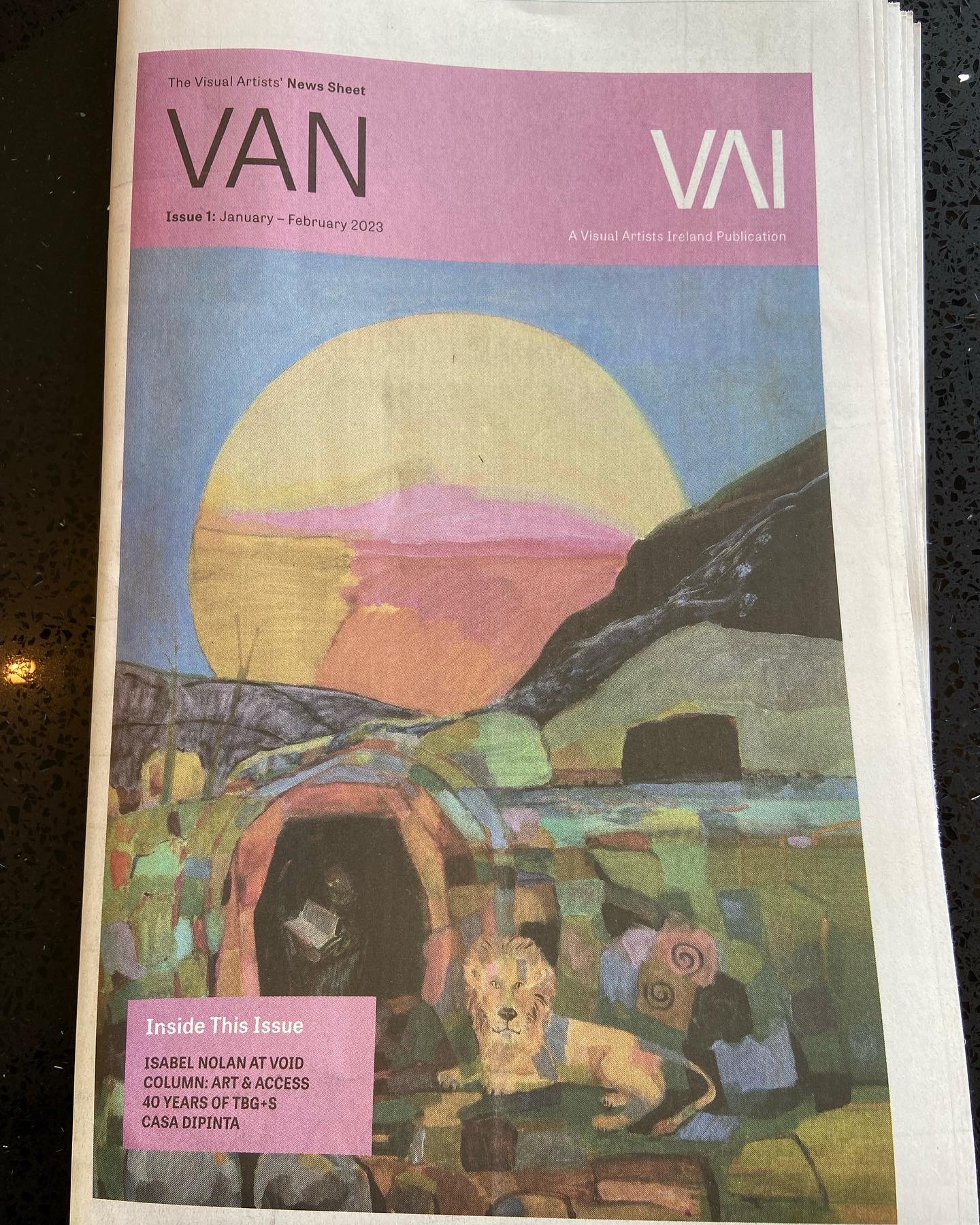 I am delighted with this lovely review of my recent show. Many thanks to art historian and curator Catherine Marshall, VAI and to Wexford Arts Centre and the arts department of Wexford county council for supporting the talk with myself and Catherine as art of the MAKE/Curate programme.

The text above reads as follows:

The small but very punchy exhibition of paintings that Oonagh Latchford put together for the  2022 Wexford Opera Festival revealed an artist who had a real connection to her medium and her content, an impression strengthened, not lessened,  by the modesty and understatement of its delivery.

The exhibition, made up of a body of canvases, painted since the recent Covid 19 lockdowns, fall into two overarching categories although both are closely connected. The first group, often painted in sepia tones, refers very loosely to family photographs, snapshots really, with all the intimacy but also the almost haphazard arrangement of people and forms that are feature of such photographs, is joined by images of more recent experiences, connected to the first by theme but painted in sizzling hot colours against brilliantly coloured grounds. The two groups have much in common,  they tend to record summer days by the sea and a desire, almost desperate, in the more contemporary ones, to hold on to those apparently carefree moments when sunshine, sand and water blur the boundaries between generations. That desire is all the more acute when juxtaposed beside the family memories, which are ever more precious as the detail disappears and time fades the colours.

Was childhood ever really as good as this they seem to ask? Did the sun always shine or is this a trick of our minds?  And what about the blurring of the sunburned bodies in the water now? As the title of the show reminds us, we now need protection from the sun in ways that our parents never expected,  just as our memories need the artist’s protection to preserve them for us. Latchford’s strategy is to surround each figure group with an aura  or halo that separates it from her generally monochrome backgrounds, stripped of narrative detail, so that it is only the sketchy figures and time itself that are presented. By contrast, the contemporary figures are clearly outlined, if blurred and unrecognisable, but the forces of water (represented by sparkling blue or aquamarine paint) and heat that forces sun bubbles on each figure or onto our vision, remind us inexorably of the threat of climate change and global warming. Should we really be enjoying this or should we be rushing to firefight? These images are full of allure but they also remind us of the threat that Dylan Thomas outlined when he imagined dying as he ‘sang in my chains like the sea’.  (Fern Hill, 1945)

Photography is not only a vehicle for providing source material for Latchford, it has a fundamentally important aesthetic dimension. She has been influenced for many years by Japanese Bokeh photography, which employs the kind of out -of -focus background and blurring of form  that you get when shooting a subject, using a fast lens, with a wide aperture. In Latchford’s work this allows her to further separate her target subject from its surroundings, making them timeless but, as in baroque painting, forcing them into the viewer’s space, multiplying the drama. You think of Caravaggio’s theatrical, spotlight effects achieved here through a painted camera lens.  Latchford climate crisis concerns are reinforced by the data visualisation graphics of heat effects on the environment, climate stripes as they have been called,  in the work of the climatologist, Professor Ed Hawkins University of Reading.

What this adds up to, is a body of work that is unmistakably modern, but which carries that same burden of history that made painting so important in the first place.

By continuing to use the site, you agree to the use of cookies. more information